We are trying an experiment with a multiplayer sandbox game, Minecraft. We have a private (whitelisted) world you can join, wander around in, build things, garden, raise cattle, fight zombies, and hang out with the other players.

To join you will need some version of the Minecraft client. Though Minecraft Java Edition for computer works best for our server, all versions can connect. You can get a free trial or just go ahead and buy it. (Note that we are not affiliated with the makers of Minecraft.)

Once you have the client installed you can play all by yourself on your own private world, but the real fun starts when you connect to a multiplayer server. That’s where this experiment comes into play.

Reach out to give us your Minecraft username so we can whitelist you for access to the server. Here are some options for that:

To visit our multiplayer server: 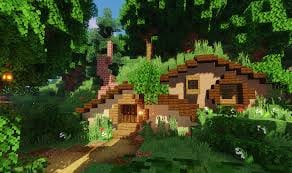 The only real rule is to be respectful of other players in both your words and actions. Some aspects of this include:

This server is mostly vanilla, but we have overridden some settings and added some enhancements to improve the experience:

In “Survival” mode, you will have to collect materials rather than just having an infinite supply of everything as in “Creative” mode. So you will need to make tools, chop down trees, grow crops, hunt, and fight monsters. We are running in “normal” difficulty, so more scary monsters spawn than in “easy” difficulty, but a lot less than in “hard” difficulty.

Minecraft allows you to “sleep” in a bed to skip the night. Normally, if there are multiple players in the world, they all have to sleep for this to work. In our server, if even one player sleeps then the night, with all it’s scary monsters, is skipped.

First, a “mob” is a mobile object within a game, which in Minecraft includes cows, pigs, zombies, skeletons, etc. Second, “drops” are the handy items mobs drop when they are killed. Third, “griefing” is a gamer term for wrecking something, basically causing grief. In Minecraft there are a number of hostile mobs (monsters) that actually grief (damage) the landscape and things you build. (You are going to love creepers.) We have disabled this for the following mobs:

A little more complex is how we handle Phantoms. If you don’t sleep for too many nights in a row, flying undead creatures called Phantoms normally begin to spawn and attack you when you are in the open. By default Phantoms are disabled in our world, but you can turn them back on for yourself using a special command. To use commands press “T” to bring up the chat window, then enter the command as shown below, including the preceding slash “/” that tells Minecraft you are entering a command rather than a chat message.

/phantoms
Toggles phantoms on and off for you. Phantoms will not spawn within 128 blocks of any player that has them disabled.

Leather is a must have, used for leather armor, books and item frames. In the base game the only way to collect it is to kill animals, lots of them. To make it possible to be a Minecraft Vegetarian, you can now make leather by smoking the rotten flesh dropped when you kill a zombie. Since zombies actively try to kill you, most players are fine with killing them right back.

There are a number of special commands that allow for easier travel. To use commands press “T” to bring up the chat window, then enter the commands as shown below, including the preceding slash “/” that tells Minecraft you are entering a command rather than a chat message.

/sethome name
Remembers your current location, assigning it whatever name you give it

/home name
Teleport to one of your named homes

/delhome name
Forget one of your named homes

/tpaccept
Accept another player’s request to teleport to you

Right-click an itemframe with shears while sneaking to hide the frame (Bedrock clients don’t understand and still show the frame).

You normally have to chop down lots of trees, one “block” at a time. In our server, once you graduate from wooden and stone axes, you can chop an entire tree down at one time. So don’t waste time, get right to crafting your first iron axe, and then get chopping!

Stick with me since this is a bit involved. You may already know you can trade with villagers for useful stuff. Did you know that when you “cure” a zombie villager they remember you and give you really good prices on trades? And in “Hard” mode, when a zombie attacks a villager it always turns it into a zombie villager rather than killing it? This means that you can introduce a zombie to some villager with a good but expensive trade and the villager will always be zombified. Then you can swoop in and cure them with a potion of weakness and a golden apple. The cured villager will now sell you that Mending book for as little as 1 emerald.

Here is the problem. Our server is in “Normal” mode, not “Hard” mode. That means only half the villagers attacked by zombies are zombified, while the rest just die. It makes for an easier experience for players since there will be fewer zombified villagers trying to eat their brains when zombies attack a village. However, it also means you have a 50/50 chance of just losing your Mending book villager if you arrange for them to meet a zombie.

Finally, we get to the actual enhancement on our server. If you nametag a villager they have a 100% chance of being zombified instead of killed. This means you get the advantage of safely zombifying and curing specific villagers like in “Hard” mode, while still having fewer zombie villagers out in the wild trying to eat your brains since we are still actually in “Normal” mode.