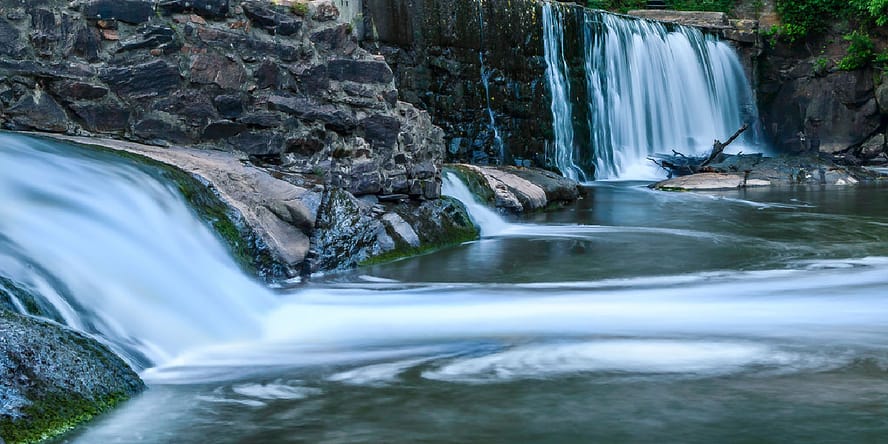 Several of my fellow COTE council members and I finally visited Lassiter Mill Falls after a year and a half of the quarantine. This site is special to us because it remains one of the few places we can hold a full moon ritual after dark on public property. In our absence the town of Raleigh has been busy restoring this site as part of the Greenway system. The public path leads from Lassiter Mill Road to the falls and ends at the monument at the Lassiter Mill site.

As I stood there looking at the mesmerizing falls, I wondered about the history of this site and how we humans have interacted with the site over time. In 1891, there were 75 mills in Wake County. A detailed 78-page history of three of the mills in Wake County was written by a NC State graduate student, Leslie Erin Hawkins, as part of her master’s thesis in 2008. These photos and this summary are completely based on her diligent work (link provided below).

In 1760, the founder of the mill, John Giles Thomas, petitioned the Johnston County Court for permission to build a mill at the “Great Falls of Crabtree”. He then acquired the land and finally received permission from the Wake County Court in December 1771 to operate a public gristmill along Crabtree Creek. On this site he also ran an “ordinary” which provided lodging and a tavern for visitors to Raleigh. In 1784 his son-in-law, Isaac Hunter, bought the business and it became well known throughout the state as Hunter’s Tavern. In 1788 this was the site of the state convention at which Raleigh was then selected as the location for the capital of the state and the future general assembly.

The mill burned down in 1804, was rebuilt and eventually sold in 1819 to Hunter’s son-in-law Durrell Rogers. The Rogers Mill, as it came to be called, stayed in the family until 1894. It changed hands several times after that until 1908 when Cornelius Jesse Lassiter finally bought the mill. By then the gristmill was no longer standing, part of the dam had fallen and Lassiter even had to rebuild the road leading from Six Forks Road to the mill (what is now called Lassiter Mill Road).

But Lassiter was determined. Hawkins learned through an interview with his daughter Mary Lassiter: “According to family legend, Cornelius Lassiter had been interested in owning and operating gristmills since his childhood. His mother had been widowed by the Civil War and had a difficult time providing for her family. As a result, she could only allow her children to have a biscuit on Sunday. The story claims that because of his love of biscuits and the desire to always have the money and supplies to make them whenever he wanted, Cornelius was determined to own his own gristmill.” But CJ Lassiter did more than that. Eventually he rebuilt the mill for grinding wheat and corn, and established a lumber mill, a cotton gin, and bought boats for rental and fishing on the creek.

When CJ Lassiter passed in 1945 his daughter Mary Lassiter took over the mill. (Notice how previously the property was passed primarily to a son-in-law. That is because women could not own property in NC until 1868 and even then their husbands still controlled it well into the 20th century.) At the time, Mary Lassiter became the only female member of the NC Corn Millers Association. She operated the mill until 1958 when a fire destroyed the mill. But because she owned other mills, her Lassiter Corn Meal continued to be produced until 1971, when the business was then sold to House-Autry Mills.

Throughout this time, the Lassiter Mill site had continued as a popular picnic and recreational ground, providing a place for campfires, hiking, birding, boating and fishing for Raleigh residents. In the early 1980’s, as many as 300 people a day would visit. But despite her many warnings, Mary Lassiter ended up closing the land to the public because of excessive littering, drinking, cursing and throwing of people off the Lassiter Mill bridge. (The bridge had spanned the Crabtree Creek at this site from the 1920’s to the early 1980’s.)

The land north of Crabtree Creek eventually became private residential property and in 1985 the land south of the creek became part of the Raleigh Greenway system. Even though the mill, the boating and the campfires are gone, local teenagers still find the romantic spot a great place to “park”. At the end of the path from the road there is a monument with one of the millstones, part of the bridge, some benches and an historical plaque. Looking at the falls I could feel the magnetism of the land. Hawkins covers the written history from 1760 to the present, but before that no doubt the “Great Falls of Crabtree” mesmerized the humans of those lands for centuries beforehand. Hopefully our continued presence will bless the land and help to keep it a safe place for all to enjoy with their friends on a mid-summer’s eve.

History based on and photos from: ABSTRACT HAWKINS, LESLIE ERIN. “I Am History, Don’t Destroy Please”: Three Gristmills and Their Communities in Wake County, North Carolina. (Under the direction of David Zonderman.) 2008
https://repository.lib.ncsu.edu/bitstream/handle/1840.16/1556/etd.pdf?sequence=1&isAllowed=y