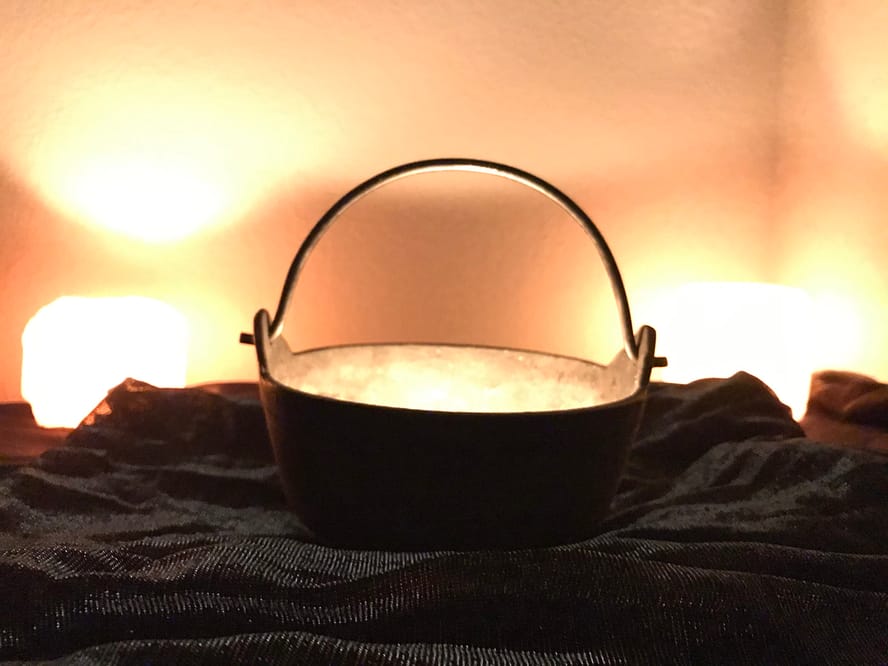 Read my retelling of the Tale of Cerridwyn here.

“Great Goddess Cerridwyn, Keeper of the Cauldron, Lady of Transformation and Rebirth, I call to you. Sacred Enchantress, Wise Woman, You who are Maiden, Mother, and Crone – I invoke you. I honor you this night, Great Cerridwyn.”

I met Cerridwyn before I ever heard Her story. My relationship with Her has been very experiential and personal, with a lot of UPG (Unverified Personal Gnosis). It started a number of years ago, in 2015, I think, though I didn’t really start working with Her until winter of 2017-2018. Her name came to me in a trance – It was the first time I had ever tried journeying or travelling within or to another place. I saw a vision of Her as a maiden, with purple flowers in Her hair. Her name appeared before me in my mind’s eye, spelling and all – which is why I spell Her name with a Y at the end instead of the more traditional E.

The purpose of the journey had NOT been to meet a Goddess, and while the experience was very pleasant, I was not prepared to start a relationship with a Deity at that time. I was also intimidated by Her reputation as a “dark” Goddess. Several years later, She popped up again and called me out specifically. I was finally ready to answer.

A little before Yule 2017, some of my friends and Pagan community members began to talk about how they were starting to hear from dark Goddesses. I was reminded of my brief interaction with Cerridwyn in my journey several years before. I started seeing references to Her again, and I blatantly ignored them. Eventually, it took the intercession of one of my friends saying “Hey, Cerridwyn stopped by with a message for you. She wants to talk.”

Mild panic ensued. I had never had a deity speak to me through someone else, and clearly She had been trying to get my attention. I spoke with a few different friends about it, trying to get over my fear of working with a “dark” Goddess. I was very heavily in the realm of “love and light” at this point in time, and I would steer clear of anything I deemed “dark and scary.” I had avoided doing the personal shadow work that was necessary to see that both light and dark are essential to life, and dark doesn’t necessarily mean bad. I would figure this out in time.

I also didn’t know how to communicate with Her. Clearly my own channels weren’t open enough if She had to go through one of my friends to talk to me! I asked the friend who gave me the message if she had any ideas for contacting Cerridwyn, and my friend (who was a kitchen witch) suggested that I make a big pot of soup, which paralleled one of Her stories from the lore. What I thought my friend had said was “Make a big pot of soup after dark completely by candlelight,” when all she actually said was “Make a big pot of soup.” I discovered this discrepancy after the fact, and I had clearly gotten some divine guidance in a way that I was able to hear it.

So, I prepared to make some soup. I found a nice recipe, gathered the ingredients, and laid out everything in my kitchen. I had been studying trance, and I wanted to make the experience as fruitful as possible. I compiled a chant to sing while making soup from the song that we usually sing at Yule at Church of the Earth. The original version contains sections on the Maiden, Sun Child, Mother, Father, Crone, and Sage. I edited the song to the Maiden, Mother, and Crone sections, since some research revealed that Cerridwyn is sometimes depicted as a triple goddess.

I turned out the lights and lit my candles. I didn’t have many – maybe five or six, so it was still rather dark. I could hardly read the recipe, which I had printed out and was propped up underneath a cabinet. I could barely see the vegetables I would be chopping. It would definitely be a test for my OCD. I couldn’t tell what was dirty or not by sight. I had to just go with it.

I began to sing, slow and soft at first, but gaining in energy and momentum. I chopped vegetables and lost myself in the song, sometimes forgetting words, sometimes skipping a section, but I just kept going. I added the ingredients to the pot and stirred, feeling very much like the witch I knew I was. I had to learn to not be afraid of the dark.

After I had added all of the ingredients, the soup needed to simmer for 30 minutes. I gave it a final stir, finished that round of the song, and sank (a little lightheaded) to my kitchen floor in silent meditation.

The vision came almost immediately. I was in a forest glade at night. There was a single fire burning in the middle of the glade, with a cauldron hanging over the fire from a tripod. Cerridwyn was there. She had dark brown, almost black hair that fell around her face in messy waves. She looked to be in her mid-30s. The contrast between her pale face and her bright red flowing dress was made even starker by the firelight. She looked at me with deep brown eyes as I cautiously approached.

“Why did you call to me?” I asked Her.
Giggles. “You’ll see.”
“But you’ve been so gentle with me. Not everyone has had gentle experiences.”
A combination of three phrases bombard my brain at the same time. “I have to do it this way. / You need it this way. / We do what we need to in order to reach out to each person.”
“What do I need to do?”
“Enjoy your soup.”

I looked at Her, confused. I had expected some profound message. She stirred Her own cauldron, and motioned for me to go, telling me once again, “Enjoy your soup.” The vision started to fade, and I was once again sitting on my kitchen floor, listening to the pot of soup bubble above me.

I turned the burner off, and ladeled myself a bowl of soup. I sat on the kitchen floor again to eat the soup by candlelight, somehow knowing that it was what I had to do. The soup was delicious, and helped ground me after the powerful experience.

As I rose again to clean my bowl and tidy the kitchen, I realized I didn’t want to turn the lights back on. It was beautiful – everything lit by candlelight. It felt peaceful. I also had a realization that I would not have been able to do what I just did a year ago. My OCD was so bad then that the idea of doing anything in the dark and not washing my hands a million times would have been impossible. But I had done it, and that was a victory in and of itself.

Cerridwyn is a Goddess of transformation and change, and I got to see so clearly in that moment how much I, myself, had changed in the last year.

I continued to make soup for Cerridwyn, albeit somewhat sporadically. I discovered that She has to be called – She doesn’t just show up for me like Aphrodite does. She continued to be vague while giving me information and instructions for how to spiritually prepare for the upheaval that was coming, and She always told me to enjoy my soup.

She has appeared to me as the Maiden, the Mother, and the Crone. While I am not dedicated to Her, she is still very present in my life, and has influenced so much of my spiritual growth. I eventually composed a chant specifically for Her to sing when I make my soup. I tend to contact Her during the dark half of the year, and our connection is stronger during this time.

I have visited Her in calm meditation, sobbing in a pit of despair, and so exhausted I almost fell asleep during our conversation. She has always had a kindly, no-nonsense energy about Her. She has helped me through some difficult changes in my life, and I honor Her as the Goddess of Transformation. She keeps me humble (at one particularly troubling time in my life, She told me I looked like a scared rabbit, but in the gently caustic way of a caring and candid grandma), and She reminds me that things in the mundane world are important, too.

During the pandemic, She has guided me to a new practice, which has helped me to navigate this uncertain world. Like most people, I’ve had a really hard time during the pandemic. There have been so many feelings: pain, grief, anger, depression, hopelessness, resentment, and fear. Sometime in 2020, Cerridwyn called me to make an offering to Her cauldron. To bring all of those feelings, the challenges I was facing, and the burdens I had to bear, and offer them to the cauldron to be reborn as something new.

It has been a transformative and freeing practice – one that I will carry with me beyond the pandemic. I invite you to reach out to Her. Make Her some offerings, and perhaps some soup. Gather by Her bubbling cauldron. Listen to what She has to say. And remember your experience.