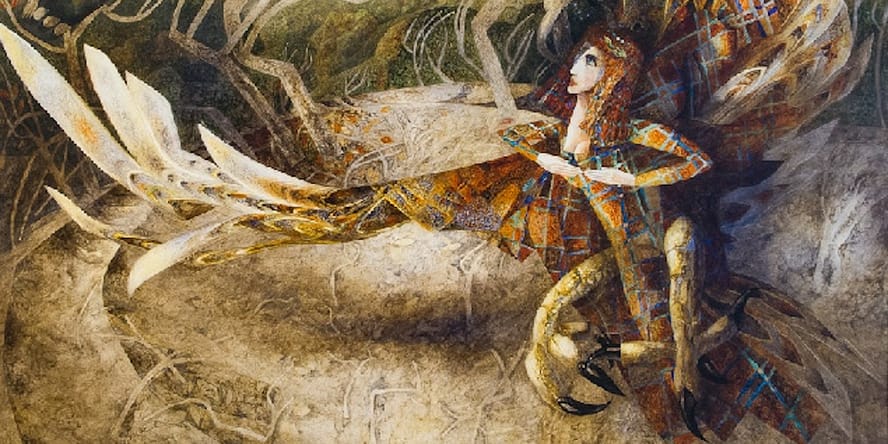 This is my retelling of the Tale of Cerridwyn.

Long ago, the witch Goddess Cerridwyn lived on the shores of the Bala Lake in Northern Wales with her husband Tegid Foel. She was known far and wide for Her magick, power, and wisdom. The couple was blessed with a beautiful daughter named Creirfyw and cursed with an ugly son named Mofran. Due to his hideous countenance, Her son came to be known as Afagddu, meaning “utter darkness.”

But Cerridwyn loved him, like any mother would, and sought to make Her son’s life better. Though She could not change his looks, She discovered a spell to brew a magickal potion that would impart the knowledge and wisdom of all worlds upon the drinker. This was the brew of Awen – of divine inspiration. The first three drops would be a blessing – The rest of the potion would be poison.

She set about gathering the herbs for the potion, setting them to boil in the largest cauldon the world had ever seen. The potion needed to simmer for a full year and a day’s time, so she enlisted the help of Morda, an old blind man, to keep the fire stoked, and a young man by the name of Gwion Bach to stir the contents of the cauldron.

Cerridwyn worked tirelessly throughout the year and a day, constantly adding more herbs to the sacred brew. On the last day, Cerridwyn finally sat down to rest. Her work was done, all that remained were a few hours for the potion to finish cooking. As Cerridwyn rested, the cauldron came to a mighty boil. Amid the roiling bubbles, three drops lept out of the cauldron, landing on the thumb of Gwion Bach as he stirred. He instinctively stuck his thumb in his mouth at the burn, and immediately realized his mistake. As his mind and spirit began to fill with Awen, he knew he had just consumed the three drops meant for Cerridwyn’s son.

The giant cauldron cracked, straining against the caustic poison now contained within. Cerridwyn came over to see what the commotion was, and upon seeing Gwion Bach, She knew. Anticipating the Goddess’ rage, Gwion took off, running through the hills. Through his newfound magick, he took on the form of a hare, dashing through the grass. Cerridwyn tailed him in hot pursuit, changing into a greyhound to hunt the hare.

Gwion came to a river, and shifted into the shape of a salmon to navigate the waters. Cerridwyn dove into the river as an otter, gaining on him in speed. Gwion lept from the river in the form of a wren, and Cerridwyn tailed him as a mighty hawk. Gwion desperately looked for a way to evade her, and found a pile of wheat in a nearby farmer’s field. He dropped to the ground as a single grain. Cerridwyn, however, was not deterred. She transformed into a black hen, and pecked at the grain until none remained, swallowing Gwion Bach.

The chase was over, but Awen is powerful. Cerridwyn soon found that she was with child, and nine months later gave birth to a boy. She could not bring herself to harm the child, as his beauty shone brighter than the stars. The boy was named Taliesen – He of the radiant brow – and through this gift of Awen, he became the greatest bard of Celtic legend.

The featured image above is “Ceridwen and Gwion Bach 4 Oil on Panel” by Tim Rossiter. Check out his gallery at http://www.timrossiter.co.uk/page6.html.