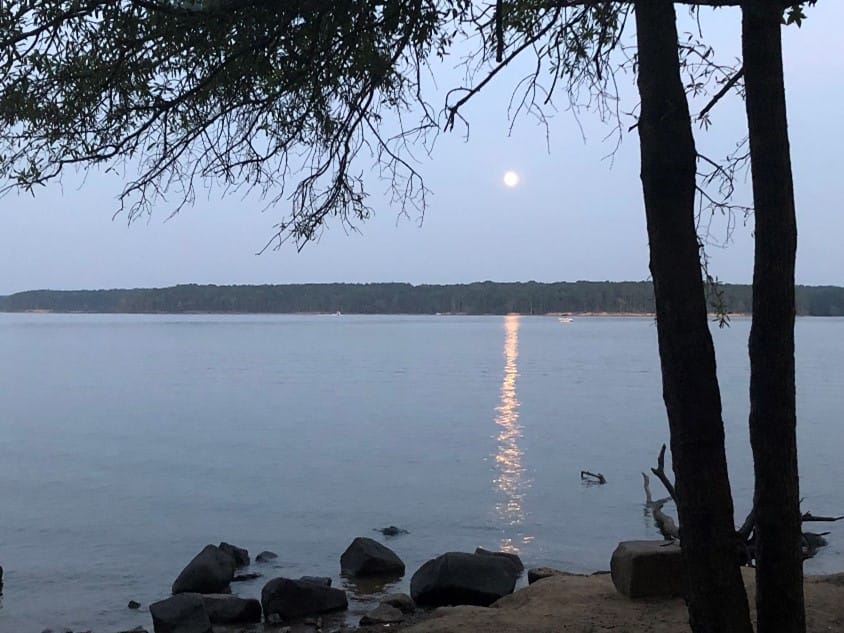 Typically, we think of the September full moon as the Harvest Moon. But this year when you turn to the Farmer’s Almanac it says September 2nd is the Corn moon and not the Harvest moon, because it is not the closest to the Fall Equinox (Mabon). So, our Harvest full moon is October 1st this year. The Almanac said that it was called the Corn moon by Native Americans. But, of course, that all depended on what part of the North American continent you lived on. After much reading I’ve come to the opinion that this shortened version “Corn” is what the early settlers called this moon because it was when it was time to harvest the corn. Similarly, it was often called the Barley moon because barley needed harvesting as well.

There is an interesting website americanindian.net where they researched the names of the moons used by more than 50 Native American tribes and though some are close, not one of them called this the Corn moon. The Eastern Cherokee tribe is here in NC and they called this the Nut Moon. Other names for the September Moon were Rice, Corn Maker, Drying Grass, Yellow Leaf, Courting Time, Paperman, Snow Goose, Little Chestnut, Ice, Full Harvest, After Harvest, Brown Leaves, Time of Much Freshness, When the Deer Paw the Earth, Autumn, When the Corn is Taken In, Papaw,  Fall, Calves Grow Hair, Big, Her Acorns, and Corn is Harvested.

As you can see virtually all of the names describe a condition of the natural world or an activity associated with this time of year. These Native American names are shared not so much so we can adopt them, but that we can see how meaning was imbued on each full moon by different peoples. In general, the full moon exaggerates emotions, good or bad, so it is time of greater energy and feeling.

In my practice, I set intentions at the new moon, when my intellect is more dominant. I ask myself what is it I wish to accomplish or need to add to my life. And at the full moon, when my emotions run high, I express my gratitude for what has been accomplished and for the blessings in my life.

So what might we call this moon based on our lives?

Cicada In parts of Virginia, West Virginia and North Carolina the periodic Cicadas which come out once every 17 years are busy this summer singing their songs in waves, like at an athletic stadium. If you haven’t heard them yet, it is worth finding a more rural place where you can hear them.

Early Night At the end of June the sun sets around 8:30pm, now it is setting at 7:45pm and our summer evenings are getting noticeably shorter.

Chrysanthemum Aside from the ones in the store, plants in the garden that have regrown from last year and that bloom each year are just starting to open their flowers.

Bergamot This is the herb used to flavor Earl Gray tea, but Monarda as it is also called has many uses and it just started blooming now at the end of August.

Another way to gather information about the meaning of the full moon is to note where in the sky it is in relation to other constellations. There are 13 full moons in a year and typically there is one in each of the astrological signs. The full moon is always in the opposite sign of the sun. Since the sun is in Virgo in early September, this full moon is in Pisces, a mystical sign. One astrologer (my sister) describes the full moon in Pisces as follows:

From astrologybylauren.com : “Rather than struggling with trying to fight against things over which we have little control, the Full Moon in Pisces is urging us to seek deeper meaning in our lives. In times of change, the first feeling may be of floundering in a sea, of having lost our purchase as we try to regain our bearings again. But when we are willing to let go of the shore (those things which we had previously depended on to always be there) that is when we are most likely to realize our greatest potential. Aligning our lives with our highest ideals, and formulating our goals in terms of these, will serve as our lodestar going forward and allow us to live a life of meaning. What would it mean for you to live a more spiritually meaningful life and lifestyle? Everyone has their own spiritual journey. And there are different roads to get there. So, which is the road that you would choose for yourself? What do you want amplified and what shadows need to come to light?”

In closing,  I believe there is spirit in everything and that when we are connected by spirit through the divine web in nature, we are more grounded. Celebrating the new and full moons gives my life more meaning.  Naming the moons in a way that reflects our life’s cycles and challenges is a way to connect to nature and to let our environment support us.