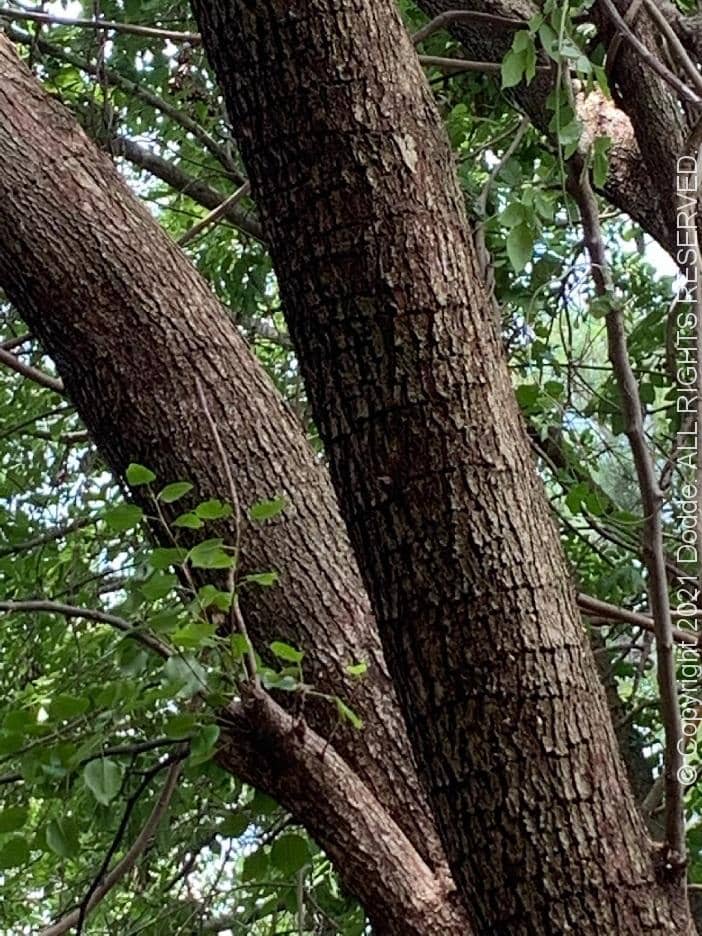 Today is a hard. I have been putting off something that is necessary, but painful. Hurricane Isaias wandered through last night. We were very fortunate that nothing was damaged, but I know soon another storm will come barreling through with high winds and bad things could happen. So, I did the thing I dreaded. I called some Trees Guys to come and help me determine who could be trimmed and who was ready to go. I had a sinking feeling they were going to suggest two trees specifically, and I was right. Iron Wood is a plucky little volunteer that sprouted by my mailbox and has been guarding the entryway to our property for years. Lately though, his branches hang like the Limb of Damocles over the driveway. They showed me he was rotting inside and with a heavy heart I agreed he should be cut down.

The second tree has shaded the sidewalk leading to the front door since The Hubster and I planted him 30 years ago. You see, The Hubster loves pears, so we bought him a tree. Imagine our disappointment when we discovered these pears were not the poaching variety, but the decorative. Yes, we had purchased a Bradford Pear. Darn you Younger Dodde for not researching carefully! BUT it turned out to be a great climbing tree for the kiddos later, and they named him Jungle. The kids loved that tree and played games in his branches, decorated him, and jumped in his autumnal leaf pile. I felt he was always standing guard, protecting us.

About 10 years ago Jungle dramatically split in half. We were able to trim him drastically and save him. But now he is huge again, hanging over the roof in a worrisome way; he is riddled with woodpecker holes, and has lived longer than most of his species. When they came today, I had hopes we could repeat the past, but apparently it is his time. As I type this, they are cutting our Jungle down. Earlier I was pacing, my heart racing, and worrying the dogs. I had to shut the curtains so Java wouldn’t make himself sick barking. Maybe writing about the trees is a better way to witness what is happening. The words “sweet release” keep running through my head. It is going to be heart wrenching when I open the curtains and Jungle is not there.

Before they came, I stepped out my front door to get the mail. A red-shouldered hawk was on a branch a few feet away, and we startled each other. I informed her she was welcome in my yard as long as she fed elsewhere. And then I looked down. Small black feathers showed me that she had already lunched. Ah, the circle of life. I had seen similar feather tableaus before, always assuming that it was the handiwork of the “indoor” cat down the street. I was not ok with the cat hunting for sport, but I am ok with the hawk hunting for sustenance. And the timing of this visit was a comfort to me, because I know that I am not living a Giving Tree scenario. I respect my trees and talk to them. Jungle said he was tired and, perhaps, it was time to move on. I thanked him and Iron Wood for their time with us. I have been sharing energy with them and the whole space throughout this process. I cry for them. I honor them. And when it is done, I will make offerings to everyone effected by this chaos.

It has been three days of chain saws. It took two and a half days to fell Jungle. I did not realize just how enormous he had become. Several times yesterday the entire house shook as gravity played its part with his multiple giant trunks; I noticed a new crack in the sidewalk where one landed. Turns out Jungle was also rotting, so I feel better about my decision. Once Jungle was down, they moved to Iron Wood, and sadly Peggy too. Various others have been thoughtfully trimmed and the house is safe.

My mom reminded me that it is Lughnasadh, the time of First Harvest. It seems appropriate timing, although it was not on my mind when I asked the Tree Guy to cut the wood to fireplace size. He has been respectful of all my unusual requests and did not bat an eye, but he did mention several times that it would be a lot of wood. I hope so, I want to continue to spend time with Jungle, albeit in a different way. I think he is ok with this plan too.