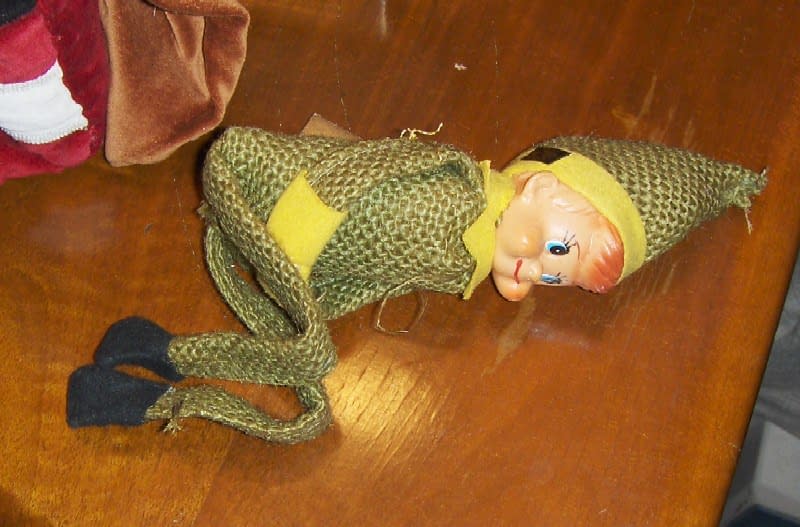 I had an inexplicably tough time getting into the spirit of my favorite seasons and holidays in 2019. Usually I love the equinoxes, especially the autumnal one—I am definitely a dark-half-of-the-year kind of person. Maybe it was the unnatural heat of last September that accompanied Mabon even as every food manufacturer and coffeehouse in existence tried to get me to choke down pumpkin spice while I was still sweating from a simple walk to my car and back inside.

Even my usual October rituals eluded me last fall. This is the one month out of the year during which I suffuse myself with all things spooky. Typically, every free night I have is spent binging horror films, tinkering with decorations and magical knick-knacks, and lighting all the nice autumn-scented candles and incenses I’ve stockpiled. Not so in 2019. I couldn’t find much in contemporary chiller cinema to interest me; I didn’t put my ancestor items out on the altar until the day before Samhain; aside from preparing for my parts in the Church of the Earth’s Samhain ritual, I did very little to mark the holiday on my own.

December wasn’t much easier. I love Yule, but I abhor the modern societal pressure that drops on us all around Thanksgiving and persists throughout Christmahanukkwanzaayule until the dawning of the New Year, whereupon the same society that condemns us for not attending every party and dinner with adequate cheer and glee then reminds us how inadequate we are because of the new pounds we acquired during said nigh-mandatory celebrations. In years past I put out freshly-cut greenery, dug through the attic for nostalgic treasures to display, and whipped up batches of wassail or eggnog for nearly every occasion.

Last year, I decided to say NO to as much stress as I possibly could. And keeping firm on that NO meant establishing some ground rules.

Rule #1: Don’t buy Obligationmas gifts. The pressure surrounding winter holiday gifts in American society is just too much: You can’t go too cheap, but buying something too expensive could give the wrong impression or come across as currying favor. You have to make sure it’s heartfelt and not generic, which can turn into an independent research project with sufficient social anxiety. My partner and I had already exchanged Yule gifts earlier in the year, imposing a modest set dollar amount to which we both strictly adhered, so that wasn’t an issue thankfully. Although I got a few gifts for my mother (my only living immediate relative) and bought something for a close friend who’d done much to support me through some tough times last year, I did no additional shopping—and I felt much better for it. Not once did I have to set foot in a mall or browse multiple e-commerce listings trying to decipher the magical intersection of fastest shipping and lowest price so as not to bust my bank account before the January mortgage came due. And let me tell you, it was glorious.

Alternative to Rule #1: Decide what you can give—and, more importantly, what you want to give. I ultimately decided that what I did want to give my friends and loved ones was my company and my hospitality. When they visited me, I wanted them to feel the warmth of my hearth and home—to be fed generously and made to feel like a part of my extended family. This seemed a much better use of my time and efforts, too, because I’m terrible at gift wrapping, but I’m a pretty damn good host. And even when our schedules didn’t line up, I could at least say that I tried my best to reach out, and they know that I care. (Besides, they’re allowed to say no too! Which leads me to my next point.)

Rule #2: Don’t feed toxic relationships. Over the past few years, I cut a lot of toxicity out of my personal circles. It started in December 2018 with marking ‘RETURN TO SENDER’ on all the passive-aggressive “You Don’t Love Jesus Enough” Christmas cards from my radical fundamentalist relatives (and declining their invitations to their thoroughly miserable and predictably preachy holiday gatherings). As December rolled by, I found that holding to these boundaries as well as drawing out new ones did me a great deal of good. A family member asked me if I’d be willing to accompany them on Christmas Eve to visit the home of a mutual relative who is, among other abhorrent things, a violent white supremacist. I flatly refused, and held my ground even when the excuses came: “It won’t be for long! I just need to drop off these packages for the rest of the family. You can just stay in the car! They might not even be home.” “No,” I replied. “Not under any circumstances.” Another relative from the creepily-Christian side of my family also tried reaching out to me about a family gathering they were hosting, hoping I’d changed my mind about going no-contact. I let them know in no uncertain terms that I hadn’t.

Alternative to Rule #2: Feed the healthy relationships instead. I didn’t feel compelled to accept every single invitation that came my way, even for events hosted by people I truly did care about and want to see. There simply isn’t enough time, sleep, or metabolism for one person to do all that they’re asked to in those 31 days. That said, when I did accept those invitations, I made a point to engross myself in conversation with them and be as present as possible in those moments—to truly enjoy the time we shared.

Rule #3: Don’t prioritize others’ celebrations above your own. About five minutes of Googling taught me that’s there at least a dozen cultural or religious holidays in the month of December, and as many as 75 when you count industry, military, special-interest, or just outright frivolous ones (December 18th is ‘Answer The Telephone Like Buddy The Elf Day’, by the way, and that seems like a super important fact you should know). Many are clustered around the solstice, and that is not coincidental. September is the most common birth month, after all, which just goes to show that we humans are intimately tied to the cycles of nature—we respond to the movement of the sun, moon, and stars just as sea turtle hatchlings and moths use moonlight to navigate through their own crucial life cycles.

Not only does all of this demonstrate why it’s best to say “Happy Holidays”—for the sake of brevity if nothing else—but it also means that everyone has different cultural touchstones during this season that resonate deeply with them. It’s unfair that society pushes those of us who celebrate less common beliefs and holidays to assent to the schedule imposed by the really big popular ones. Nonetheless, it’s common to feel as if you have to say no to your friend’s Yule party because it’s on the same weekend as the annual family Christmas gathering full of folks you don’t even like in the first place. You feel the guilt when a relative asks why you can’t just skip that full moon ritual because “We always get together for the first night of Hannukah.” If you skip a company holiday party to attend a church event, there’s a lingering sense that others will think you don’t care about bonding with coworkers. Even if others don’t actually feel that way, the anxiety that originates within the self that you aren’t doing enough to show that you care about everything and everyone is all too real.

All of this adds up to us subjugating the moments that truly fulfill us in lieu of shallow exchanges that we mostly endure for the sake of others’ feelings, and that’s not fair. You’re entitled to the same respect for your customs and traditions as you show to others.

Alternative to #3: Make time for your traditions. Now, this isn’t to say that you should force yourself through the motions of celebration or ritual if you don’t feel up to it. What it does mean, though, is that if you’re feeling up to celebrating Samhain with your coven rather than tossing out candy to kids, you shouldn’t feel obligated to forsake that time. If you’d rather mark a dark moon that falls on Thanksgiving than go to that big family gathering full of folks you don’t care about, that’s okay. And if you’re excited about an all-night solstice vigil but not too jazzed about going to your little cousin’s nativity play, strongly consider doing what fills your spiritual cup rather than acting on obligation and making yourself miserable. Love yourself enough to do the things that bring you joy and contentment. You do not exist merely for the gratification of others.

I started writing this article about a year ago, but it got lost in the shuffle among some other deadlines that had to take priority. I had planned to come back to it this autumn because I felt that the advice I’m offering would be most impactful before the big crush of winter holidays in America came down on us.

I never expected COVID-19 to come along and upend some of the points I’d made, though.

This year is going to be extra difficult for everyone, but for pagans in particular. Not to get too political (and really, this shouldn’t even be a political issue), but our community tends to err on the side of rationality and science in our day-to-day living. It’s a strange contradiction that pagans believe in some outlandish, unprovable things, yet we embrace the mundane alongside the magical. We enjoy our local metaphysical shop’s cold remedy teas, for example, and yet most of us still get flu shots and take doctor-recommended medications when we’re sick. We’re pretty well unified behind the idea of wearing masks and distancing to reduce potential exposure risks for ourselves as well as others.

Some people are going to great lengths to ensure they and their loved ones are protected from COVID-19, up to and including complete physical isolation (which, to be clear, is completely okay in the abstract). Others are slowly opening their circles—or their “germ pods”, as some of my friends like to call them—to allow for small in-person gatherings of friends and co-practitioners for rituals and workings (usually still with distancing precautions and masks as necessity dictates).

Unfortunately for us, not everyone is being as conscientious right now. And most unfortunately, especially in the American South where many of our extended families identify with religious and political movements that eschew objective reality to the detriment of all, attending gatherings represents a real danger to our health. That’s why this year, it might be more important than ever to hold your boundaries and say no. This can be doubly hard when you’re craving interaction with people and the only ones who seem keen to do it are the folks who aren’t being safe about it. Humans are inherently social creatures, no matter how introverted a given individual might be, and it can be tempting to just give in.

I implore you to think carefully about the risks and make smart decisions. Because I really hope that you’ll still be here next year, when we’ll hopefully have a chance to celebrate our traditions and holidays face-to-face again. It just wouldn’t be the same without all of you.