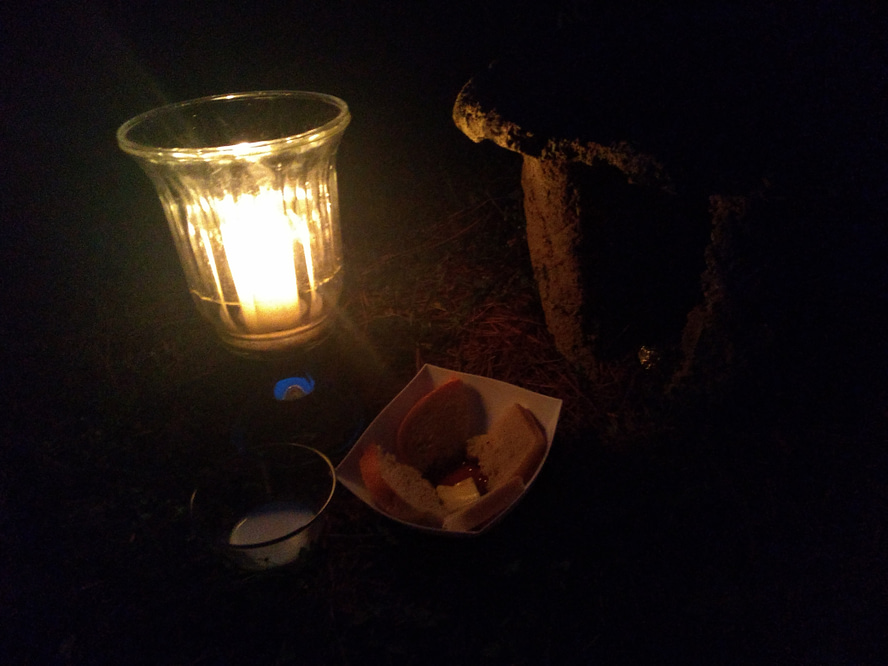 When I warded the property boundaries around my house some time ago, my wording of intent for those wards was very specific: Woe unto any, mortal or no, who crosses my wards with ill intent toward me or one under my protection. For me, that is enough, and to date those wards have been quite effective. I have actually witnessed a person who once did me harm in the past refuse to so much as step onto my porch when they stopped by regarding some unfortunately necessary business between us. I have felt no harmful presences in my yard or home after performing this warding, and I renew the power in those wards regularly to keep it that way.

As a result of that confidence, I’m not one to be overly cautious about keeping away what some folks euphemistically refer to as “The Good Neighbors”, but neither do I typically encourage their presence either. I keep a smattering of objects on hand that would likely be of interest to such beings, just so that if something goes missing, I can offer a gift in exchange to see that it comes back. However, because a few of my patron deities are intrinsically tied to the Fey (whether by their own natures or a twist of history), I occasionally make offerings of honey and cream in the yard. It’s a delicate balance, one which I usually sum up as “Speak softly, but keep a length of sturdy iron close at hand.” The Good Neighbors have never troubled me, nor I them.

No trouble, that is, until an incident that occurred at a party I hosted some time ago. A very good friend of mine whose spiritual path is rather different from my own, but who also believes from firsthand experience in the Fey and other things that bump and/or sparkle by night and/or day, had a bit too much to drink that evening. He overheard a few of us Pagans in attendance talking about our recent experiences with mischievous Neighbors and took it upon himself to stomp a circle around my yard in an attempt to ward them away. One or two people expressed surprise that I didn’t try to stop him. I explained that I was not concerned about his activity, and that I suspected he was being laughed at by whoever might be listening. Furthermore, I expect there was some spiritual backlash, as he developed a massive headache after his stomp-around. (Whether that is attributable to the whiskey or to more esoteric energies is still up for debate, I suppose, but that’s my belief.) Like I said, my wards are very clear, and I alone am master of this domain—not anyone else who takes it upon themselves to make a show of dominance on my land.

The problem is, I was wrong…sort of.

About a week later, I started noticing that the yard had lost a bit of its usual lustre. Even in wintertime, when I let the garden beds go wild and ignore the amassed leaves and pine straw, there is still a shimmer in the air—a sense that this place is cared for by beings of this world and others. Now, it was deathly quiet—a feeling of emptiness pervaded a place that I would never have previously described that way.

I did some meditation to see if I could get any insight as to why, and the answer was pretty clear: my friend’s well-intentioned but overly-aggressive show of dominance had been construed by a few visiting entities as rude. They made it clear that they did not hold me entirely responsible for this rudeness, but that some sort of compensation was still expected if things were to return to the way they’d been previously. At length, I brokered a negotiation—one of their demands was a non-starter, as it would have been damaging to local wildlife—and prepared an appropriate offering of contrition. On a plain white plate, I laid out an offering of bread, fruit, cheese, honey, and cream, artfully arranged as one might expect to see them on an appetizer plate in an upscale restaurant. I also offered a shiny—the Neighbors do love shinies!

But it wasn’t enough to do as I normally do and leave it at the base of the old pine tree in the yard, where a makeshift house for visitors sits in the west, well-obscured from most prying eyes. No, this time I would have to make a formal presentation of the offering—and they wanted a song, too. This request had been a last-minute addition, and I was momentarily at a loss for what to sing. I went with the first thing that sprang to mind: “Over at the Frankenstein Place”, from The Rocky Horror Picture Show. A lovely ditty, one that speaks of hospitality and offers a beacon to the lost. There’s an inherent and slightly macabre irony in that choice of tune, of course, for anyone familiar with that musical, but this twist seemed to be all the more pleasing to the host of attendants. (Fun Fact: If you walk the perimeter of my yard slowly in deosil while singing that song, you’ll make one full revolution around the quarters by the time it is finished. Handy, huh?)

I have since made good on my other promises to the Neighbors in due course, on a timetable agreed to by all. I’m happy to say that the lustre has returned to the yard in the weeks since then, and all of my usual visitors seem very copacetic—bygones will be bygones, as it were. I hope anyone reading this will bear in mind to keep an ear open for the Good Neighbors who drop by at your place, if you allow that sort of thing, and make sure that you are clear and firm with them, but also polite. And, apparently, it’s a good idea to make sure your guests are polite too. That is a mistake I will surely never make again.