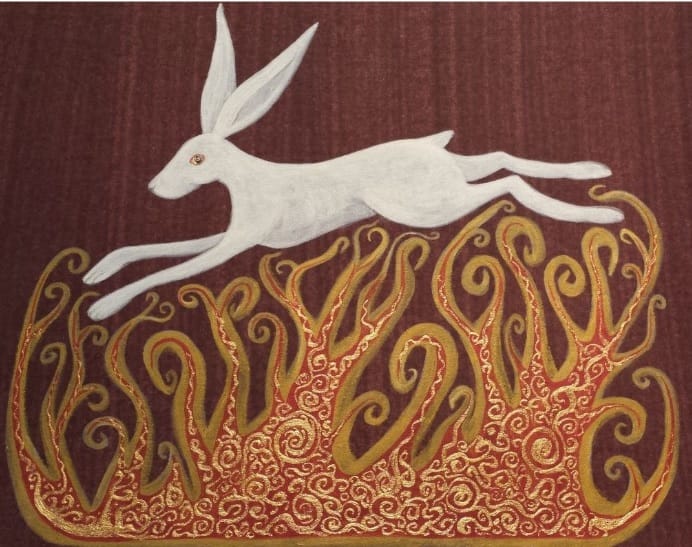 Every year, various cultures and faiths mark the coming of spring, and with it the theme of redemption and rebirth. The Jewish people celebrate Passover, Pesach, and remember the story of their people being freed from slavery. The Christians celebrate Easter, or Pascha, and tell the story of the God-man who rose from the dead. We celebrate Ostara, which some say comes from the name Éostre, the Germanic goddess of the sunrise and fertility (who may or may not have been invented by the Venerable Bede), and we exchange knowing smiles as we recognize imagery such as eggs and rabbits proliferating. We recognize that such festivals, which are tied to the deep cycles of the earth, might change their names, but they never fully disappear.

It can be both a joyful and confusing time as we remember where we came from and where we hope to go from here. Many of us are standing in a liminal space, in the in-between where even breath comes tentatively. Here on the sharp edge between past and future, so much is uncertain, unpredictable. Sometimes winter lingers overlong and frozen slush coats unsuspecting blossoms. Sometimes just when we think we have escaped a difficult cycle, we find ourselves doubled over with longing for the very things that caused us pain.

And sometimes, we brace for the cold and damp, maybe cancel our plans, but the sun comes out anyway. Sometimes we think we will never know joy again but find within ourselves a wild rush of hope, a startling vision of life worth living. Which will it be? Darkness or light? Despair or hope? Death or life? When the tension is too much to bear, we spring forward into the unknown.

After the requisite sacred talky bits, I invited those who were attending the ritual to choose a rock and think about something in their lives that needed to be reborn or was already being transformed. I asked them to pour their energy and intention into the rock, and when they were ready, to come up and place it in the water that represents the Well of Healing, the Cauldron of Rebirth. While they were doing that, I led the lovely pagan choir in singing a reclaimed hymn to the Goddess—one of my favorites from the time before. Once everyone had chosen and released their intentions, we all took turns reading images of new life:

Genesis. Out of nothing, something comes into being.
Darkness recedes as light returns.
Cold eases into warmth.
The dark moon becomes a shining crescent.
The last star shines as purple and blue fade into rose and gold.
Snow melts and swells the rushing streams.
The raging storm calms into a gentle rain.
Seeds crack open and tender shoots surge up through the soil.
Brown fields are spread with fresh blankets of green.
Bare branches are wreathed with delicate leaves.
Tightly wrapped buds unfurl into glorious bloom.
Migrating flocks return to the awakening north.
Bears lumber from their dens with fluffy cubs.
A baby takes a first breath and screams it out triumphantly.
An egg cracks and a determined chick unfolds itself.
A rooster announces the first rays of the dawn.
A snake sheds its skin, revealing newly vibrant colors.
Tadpoles wriggle into the shallows.
Caterpillars emerge from their cocoons as butterflies and take flight.
Morning silence is filled with squirrel chatter and calling birds.
Lambs bleat and frolic on the hillsides.
Dough is taken from the oven as fresh-baked bread.
The eight-spoked wheel turns again.
The sun processes with Taurus, the heavenly bull.
The Phoenix bursts into flames and is reborn from the ashes.
The scarab pushes its bundle as Ra pushes the sun into the sky.
Osiris is gathered from all the provinces and made whole again.
Persephone emerges from the realm of Hades, and Demeter rejoices.
The hare jumps into the fire—and bursts out into the space beyond.
The Green Man lifts his flute and calls the wild creatures to dance.
The Maiden walks the earth, and life springs up in her wake.