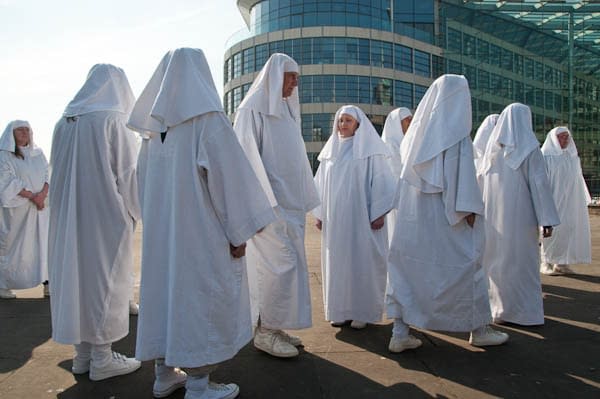 Q. Out of shear curiosity, where does your Druid group fall into the whole scheme of things. Are you guys part of the traditional group connected toBritain? Or are you part of the reformed group? Or a totally different group all together?

A. Awen’s Light Grove is a seedgroup of the Order of Bards, Ovates and Druids based in the UK (druidry.org). We do have a couple of active members of the Henge of Keltria and the two paths are quite harmonious.

Q. From my readings intoDruidism, it seems your faith varies greatly as to what entities the Druid groups might worship. Some stick to more Wicca like deities. Some are monotheistic worshiping the Paleolithic “Mother-Goddess,” which is not related to the actualCelts at all since it belong to a group of people who lived in Europe before the Celts, but there is always a possibility that the Celtic people assimilated it into their faith.

A. You can also have a grove that worships nothing at all. Many pagans will reject the word ‘worship’. It carries a strange connotation that is left over from the Fire society of the Roman invaders, still echoed in the christian pantheon. Interestingly, we have druids that still follow a Christian path or even Jewish or Buddhism.

The energy you channel in your grove will cast a personality on the place, group and participants. My experience is that it is typically a positive, nurturing thing, though I know that there are dysfunctional groves and covens out there. I have seen no organized ‘devil worship’ and remember that ‘devil’ is actually part of the christian pantheon, so most pagans have little use for this deity of fear mongering and destruction. We focus on Celtic deities and do not get hung up on time period. Also, don’t forget to include the Ancients (your personal or cultural ancestors) and the Sidhe (pronounced ‘shee’. aka nature spirits).

A little on deity, because it is much different than current day concept. To understand the “pagan” approach, you’ll need to adjust your basic concepts of Deity(ies) to one that is not personified, or at least not rationalized. Most pagans see deities as archetypal energies of human existence. They are reflections of the ‘first imprint’ on the human mind or even encoded in our DNA. Much like a hatching goose identifies first sight to that of his or her mother, the archetypes that inform human awareness are symbolized as deity. These deities fit concepts such as, the hunt, harvest, fertility and even vengeance, forgiveness and the afterlife. It is most beneficial if the student of druidry can identify these energies within themselves and relate them to their modern condition. So the deities are not omniscient, omnipotent and can be misinformed and even wrong. Interestingly, druids rarely consult deity for advice at all, instead preferring communion and to exchange energy.

Q. What is your opinion about the all the archeological information coming out that druids did not really worship at Stonehenge and if they did it was post-Roman invasion. Also that Stonehenge is not a druid artifact at all but belonged to a people pre-Celt (Celts were an Iron Age group of Indoeuropeans) people possibly before the European people that worship the Neolithic “Mother-goddess.”

A. Does it matter? :-)) I think the difficulty you get into with this is “when do you *officially* make the cutoff of being a society with a druid priest class?”So whether they were proto-druids or druids proper, our ancestors had a reverence for the sky and built finely tuned monuments in honor of these forces. The technology aspect of being able to carefully calibrate harvest and the seasons is quite interesting and capture the minds and spirits of druids globally. Yep, we like to claim Stonehenge as a sacred site. There are a couple thousand stone and wooden circles on the British Isles. There is a larger story to these artifacts than who built them and when.

Q. Also would you agree with the claim that the Celtic Druid is actually and offshoot of the ancient Indoeuropean priesthood with ties to the Brahmen of India.

A. There even seems to be a Pythagorean connection as well. These people traveled – I don’t think they were any less mobile or curious of the world around them than we are today. It just took more time to get from point A to point B :-))

Q. Another curious question is do you perform animal sacrifices to your gods?

A. I can’t speak for everyone in druidry but Awen’s Light Grove doesn’t do animal sacrifice, nor have I heard of the practice anywhere in the Raleigh area. Also, OBOD and Henge do not teach nor condone animal sacrifice.

Most druids that are practicing with a group and are informed in their druid practice will have a reverence for nature. Though I know druids who can and do hunt, slaughter their own farm animals and fish, they do not do it in order to propitiate the deities.